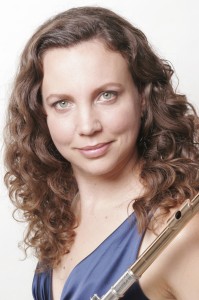 Amelia Vitarelli, a native of California, has emerged as one of the leading music educators in the San Francisco Bay Area. She performed extensively with Areon Flutes, an ensemble which she co-founded, from 2005-13. Her 2007 New York debut with Areon Flutes at the Weill Recital Hall at Carnegie Hall received brilliant reviews. In 2008, Areon Flutes was awarded the Bronze Medal at the prestigious Fischoff National Chamber Music Competition.

Ms. Vitarelli began her musical studies at age 10 in the California public school system. Seen as a bright young talent, Ms. Vitarelli was encouraged to begin taking private lessons in solo repertoire, chamber music and music theory. Soon after, she held top chairs in state and regional honor bands and youth symphonies and participated in numerous festivals and competitions. Ms. Vitarelli began her collegiate studies with French flutist, Isabelle Chapuis Starr at San Jose State University in California before even finishing high school. Upon completing high school, she received a scholarship to continue her studies there and completed her Bachelor of Music degree in Flute Performance, Magna Cum Lauda and with Honors. During her junior year she was a selected soloist with the San Jose State Chamber Orchestra where she preformed J.S. Bachs Bradenburg Concerto No. 4. After graduating, she attended the University of Iowa were she completed her Master of Arts in Flute Performance, Summa Cum Lauda, with international soloist and recording artist, Tadeu Coelho. During her masters studies, Ms. Vitarelli was a Fine Arts Grant Recipient where she presented two recitals of Twentieth Century flute music. Her other advanced studies include the Domaine Forget International Music Academy in Quebec, Canada and postgraduate studies with Jill Felber at the University of California, Santa Barbara. Ms. Vitarelli has also performed in numerous masterclasses with some of the todays leading flutists, such as Robert Stallman, Keith Underwood, Raymond Guiot and Claudia Anderson. Ms. Vitarelli is committed to sharing her artistic vision with todays young flutists. She currently has a competitive private flute studio in Silicon Valley, CA. Her students have won numerous national, state and local competitions including the NFA High School Flute Choir Competition, Bands of America and the CA All-State Honor Band. Ms. Vitarelli served as Artist-In-Residence both as conductor and chamber music clinician with Areon Flutes for the El Camino Youth Symphony from 2003-2008. Also in 2003, she was the Artist-In-Residence for the Music-In-Action program at the Community School of Music and Arts where she presented numerous concerts to thousands of elementary school children throughout the Mountain View and Los Altos areas of California.